The book of Esther moves away from the narrative history we have previously engaged with.  Esther belongs to the third section of the Judaic canon, known as Ketuvim, usually translated as “writings”.  Books such as Esther remind us of how the Jewish faith developed.  Esther partners with Ecclesiastes and Lamentations when read on the festival of Purim - the Jewish holiday which remembers the rescue of the Israelites from Haman’s plotting.

In Esther, Haman, an Agagite (A person with tribal links to Esau, Jacob’s brother, and by tradition, an enemy of the Israelites), became a sort of Prime Minister to the Persian king Ahasuerus.  All the king's servants were required to bow to Haman.  However, Mordechai, an Israelite, refused.  The anger of Haman was beyond measure.  In fact, he lost the plot - ordering the killing of all the Israelites in the Persian empire.  Esther, also an Israelite, but the king's most recent wife, found out and intervened.  Esther invited Haman, and the king, to two banquets. It was during the second banquet that Esther informed the king of Haman’s plan.  The king left the room for a short time and returned.  Guess what he saw, only Haman prostrate on Esther's couch (to beg for mercy as it happens).  The king, already not happy with Haman, thought it was a sexual advance, not good for Haman.  Like some sort of Old Testament soap opera, Esther uses complex irony as a backdrop to its message, as Haman was hanged on gallows that he himself had built for Mordechai. The bodies of Haman's ten sons were also hanged, having already been killed in combat with the Israelites.  Although these events are used by the Jewish faith as the reason for Purim, the events are not usually accepted as historical, more the stuff of legend.  This might explain Esther’s lack of narrative history identity in Hebrew tradition.  Also, Esther is a book where God is not mentioned, making nationalism its primary purpose.  So why bother with including it in the Bible – from both a Jewish and Christian perspective?  What do you think?  Perhaps, the answer lies in the word ‘Purim’?

Translated from the Hebrew as ‘Lots’, as in drawing lots, it refers to Haman’s lottery system of deciding the date on which the killing of the Israelites would begin.  Illustrated over 70 times in the Old Testament and only 7 times in the New Testament, the use of ‘Lots’ demonstrates much of humanity’s decision making as self-centred, not God-centred.  From a Jewish perspective, Hamon devalued the Israelites by his angry response to Mordechai.  Similarly, he dehumanized them by his use of a lottery for deciding the date of their destruction.  For the Christian, look no further than Psalm 22:18 and John 19:23-24.  Both focus on casting lots for the garments of the Divine Shepherd.  Jesus was devalued and dehumanized by those he angered because he would not bow down to human power.  His life became subjected to lottery mindsets.  Despite this, Humanity had already been dealt a divine intervention by the broken life on the Cross who was originally revealed by a Star (The meaning of the name Esther).  Jesus the light of the world, did not use a lottery to decide our worth, only unconditional Divine Love.  Despite all our transgressions, Grace filled Salvation was revealed as God’s prevenient gift, a gift given so that ALL can be saved.

Perhaps the book of Esther speaks of God after all? 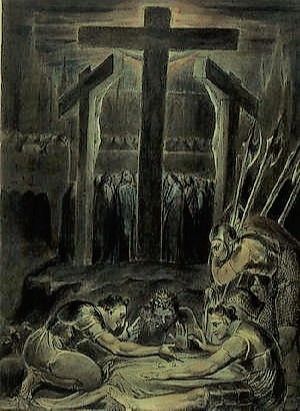