In one sense, Jeremiah is more of the same when it comes to the well-trod Old Testament pathway we know as the theological mix of Prophetic Oracle and Narrative History.  Having said this, Jeremiah is not completely entrenched in any dominant chronological order.  Accordingly, most commentators agree that Jeremiah was written sometime between 626-586 B.C.  With major personalities such as Baruch, Ebdemelech, Nebuchadnezzar, and the wider corporate understanding of Judah and the Rechabites, the book of Jeremiah embraces a broad cultural landscape for making its point - warning of destruction if Judah did not return to the fold and submit to God. Jeremiah identifies the sins of God’s people and wants them to realize their serious nature. He then, I suggest, prophetically signposts Humanity to Christ, as he delivers prophecies of the coming king and the New Covenant that would be made.

The narrative unfolds through the book’s chapters in easy digestible chunks.  In chapters 1-10, for instance, God calls Jeremiah and proclaims to his heart:

Jeremiah condemns Judah for their sins and attacks their faithlessness.  Chapters 11-28, continue the drama:  Jeremiah warns of the destruction that would be poured out on Judah.  The book speaks of God’s holy anger – remembering here that this is an Old Testament context where fear, anger and judgement were far more relative to shaping societies than say Love and Forgiveness. At one point God is recorded as saying:

For consideration is the possibility that God is portrayed as demonstrating what could be called a ‘parental’ Spirit over God’s chosen people.  Meaning that God does not travel along any of humanities self-righteous pathways (a direction for human anger) but calls us all to follow righteous paths via a promised Saviour – now delivered in Christ (Holy Anger).  In other words, God’s negative response to our nature reveals a positive outcome – a pathway where we discover the truth about Faith, Hope and Love.  I would argue that Jeremiah sets the tone of the book clearly down this road from chapter 29 to 38.  Here, Jeremiah writes about the New Covenant and the hope that God will deliver post exile. King Zedekiah who did not heed his warning throws Jeremiah into prison and then into a cistern. Nevertheless, Jeremiah warned that the King would fall into the hands of the King of Babylon.

In chapters 39-52, Jeremiah presents a sort of prequel to the previous hope and promise.  It is called: The fall of Jerusalem.  Thought to have occurred in 586 B.C, many prophets had already forecast this – it was old news.  The Babylon empire finally swallowed Jerusalem and the land of Judah.  The exile of both kingdoms, Israel first, and then Judah was complete – prophecies fulfilled.

As Jeremiah declares in 37:17, King Zedekiah was captured and his son murdered in his presence, he was blinded, bound, and dragged off to Babylon into captivity.  However, God promises to rescue the nation from captivity by proclaiming:

In whatever way we view this, A God of Love and Mercy was at work. Jeremiah may have wept, God may have exerted a Holy Anger, but the promise of God was steadfast.  That was the Good News that Jeremiah wove into his delivery to Judah.  This is the nature of Christ for all humanity today!  Jeremiah helps us to see clearly in the Old Testament that God’s fingerprints of Love are there to be found.  This is what I called the attached image.  It took several weeks to paint and is hard to look at.  But the suffering we experience at the hands of each other can and will be laid to one side by the Love of God in Christ. 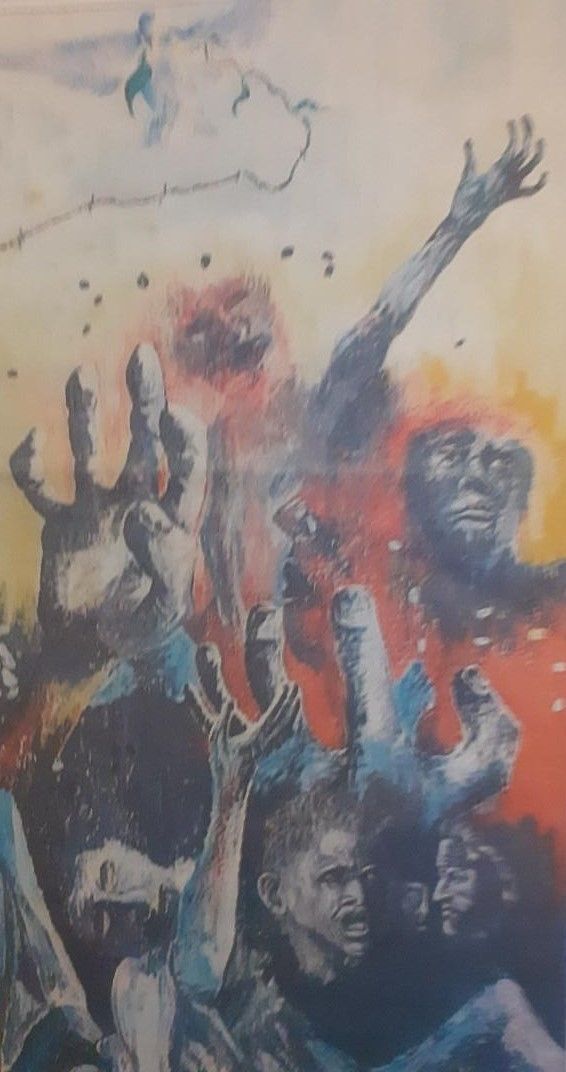