Proverbs, as the name suggests, is a collection of short sayings that declare a perceived truth.  As an Old Testament recipe for Wisdom, Proverbs are flavoured with Parables and Poetry.  Although widely accepted as the work of Solomon, Proverb’s concluding chapters are credited to Lemuel and Agur.  Historically, Proverbs reflect Solomon’s reign between 970 and 930 B.C.  The book’s purpose is to unveil wisdom as part of God’s teaching to God’s people in easy to remember bitesize explanations – which sounds like a good idea to me.  For example, "He who tills his land will have plenty of bread" Proverbs 12:11, meaning it is true that working the land is needed to bring bread, but not true that this is guaranteed.  The wisdom is in the understanding.

The first nine chapters of Proverbs provide a template for understanding wisdom in a more infantile way – a combination of humanity’s childlike nature and God’s parental identity.  This gives humanity an easy to grasp method of identifying the will of God.  Proverbs reminds us that the basic understanding of God ”is the beginning of knowledge”.  Also, that a childlike humanity must: “Trust in [God] with all [their]hearts and not lean on [their]own understanding. In all your ways acknowledge [God], and [God] will make our paths straight” - based on Proverbs 3:5-6.  Proverbs next fourteen chapters demonstrate Wisdom as a life template for ordinary people – whatever that might mean?  It is these chapters that are more parable than proverb.  They tend to contrast righteousness and wickedness, with a righteous path as a commitment to God.  A classic verse for this is Proverbs 14:12: “There is a way which seems right to [humanity], but its end is the way of death”.  Proverbs final six chapters unveil a model of Wisdom that could be described as an enhanced disclosure, a way of being wise that is designed for rulers and Kings – as in Hezekiah, who takes centre stage in Proverbs chapter 25.

Whereas Hezekiah has a reasonable Old Testament profile, a certain king named Lemuel, only ever appears in Proverbs 31.  However certain Jewish writings identify Lemuel as Solomon.  It is common in Old testament writing to offer the same person or understanding in two identities – fitting in with offering the truth in different ways.  This is the parabolic way of teaching.  Lemuel means "Belonging to God" and Solomon means “Peace”, as in Shalom.  Because Lemuel is identified as a king, Lemuel appears to have been a ruler.  But without any official historical listing as a king during the time of Proverbs, Lemuel carries every possibility of being just another name Solomon – as a sort of related truth?

Agur, on the other hand, appears to be a non-Solomon figure, appearing in Proverbs 30 as the “Son of Jakeh”.  Thus allowing for the concluding narrative of Proverbs to interweave Agur and his ‘father’ Jakeh, with two other characters named Ithiel and Ucal - Agur’s representative audience.  Proverbs uses these characters to dramatize the truth that even God’s ‘foolishness’ is way beyond the greatest wisdom of Humanity.  And like every biblical book, there is much to theologize over in Proverbs - and many ways of exploring its themes.  However, as Christians, looking for Christ within its narrative, and taking our lead from Proverb’s bitesize literary style, we might benefit from looking closer at the main characters.

In Christ, Discipleship means I can know perfect PEACE, that I BELONG TO GOD, that my heart is COLLECTED when freely given in faith, becoming OBEDIENT to the one true wise GOD who IS WITH ME and in this I can CONSUME the Truth of Christ.  Is this who you are?

The image today is a portrait of someone I never met but was photographed along with two ‘characters’ from the Island of Sark, where I once served.  Different ‘characters’ who revealed a common truth about their lives.  His name was Wynter Vibert, Wynter, as in winter, which stems from the word water.  For me, Proverbs offers Wisdom as that which turns the winter of humanity’s discontent, into a rich wine of understanding the Truth of truths………Mmmm, water into wine?? I will leave you to think about that. 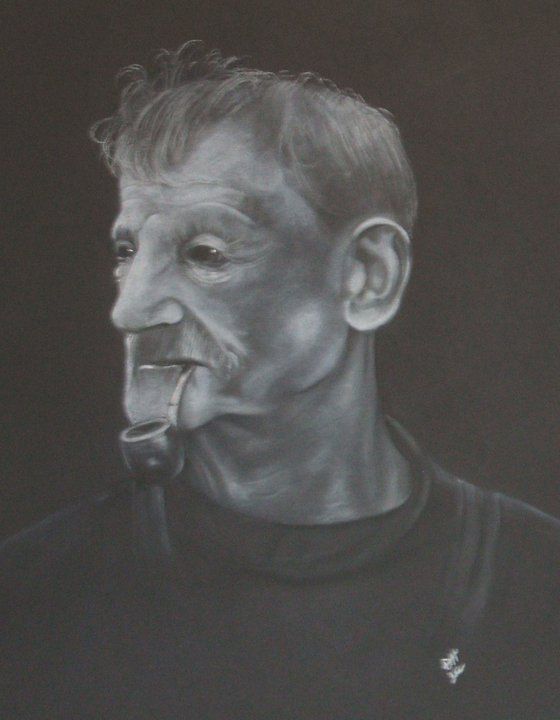