As we continue our Old Testament explorations, we arrive at a pivotal point in time for the narrative history we have peeled back in previous books.  Despite including all the usual writing styles - Prophetic, Apocalyptic and Parabolic – Ezekiel is quite focused on identity.  Meaning that Ezekiel – as an individual - is identified as a “Watchman” for God.  Moreover, a watchman that is almost military in style - a sense of Ezekiel being on duty and raising an alarm that proclaims the enemy is at the gates. This is Ezekiel’s commission.

Widely accepted as being written in 571 B.C, scholars of Ezekiel are confident that this date is accurate.  Mainly because Ezekiel – as a book – contains more defined dates than any other book in the Bible. With key personalities such as Ezekiel and his ‘wife’, the leaders of Israel, King Nebuchadnezzar, and that man of mystery – “The Prince”.

In essence, Ezekiel’s message was aimed in the direction of Jerusalem. This is born out in the fact that Jerusalem is mentioned 23 times in the first 24 chapters. There is some reference to the “house of Judah”, but only in five verses, whilst the “house of Israel” warrants a mention in 78 verses of the book. Written to announce judgment, particularly to Jerusalem/Judah, the book shows a softer side by offering a final chance to repent. As in all Old Testament theology, Ezekiel counters the judgemental nature of God with a promised deliverance from captivity – with Babylon being Ezekiel’s source of captivity. As a further identity tag, Ezekiel hails from a priestly line and chapters 1-3, outline how God commissions his servant. Through visions, the message is to confront God’s sinful people: -

“I am sending you to the sons of Israel, to a rebellious people who have rebelled against Me; they and their fathers have transgressed against Me to this very day” (2:3).

In chapters 4-24 - a sizable portion of the whole book, we find Ezekiel on the doom and gloom road. On this journey, parables are told. For example, the one about the comparison of Jerusalem to the nature of an adulterous woman. As an allegory, this parable runs through chapter 16 for 63 verses – talk about labouring the point. In a nutshell, Ezekiel teaches that God is cleansing God’s chosen people, with the more succinct point being made.

“You have borne the penalty of your lewdness and abominations’, the LORD declares” (16:58).

Moving on to chapters 25-32, Ezekiel condemns seven other nations who disrespect the God of Israel because of a national identity wrapped up in captivity.

However, these less than magnificent seven, would soon succumb to their own humiliating fate. These nations were Ammon, Moab, Edom, Philistia, Tyre, Sidon, and Egypt.

Finally, chapters 33-48 of Ezekiel, deliverance and restoration are the order of the day.  Not only for the Israel in context, but for the future via a promised Messiah.  First though, Ezekiel offers the famous backdrop of the valley of the dry bones.

And so, to chapter 46 and the man of mystery – ‘The Prince’.  Despite Ezekiel surrounding the Prince with hi-days and holidays as per temple tradition, and applying a Mosaic legalistic framework as one would expect, Christianity can gain a great deal of insight from Ezekiel’s deeper potential. Certainly, in chapter 37, the notion of One Nation Under One King is a perfectly credible Body of Christ Template.  As powerful as this seems, a more pertinent metaphor lies at the very end of Ezekiel: -

“And the name of the city from that time on will be: THE LORD IS THERE”.

If the whole of humanity is the new Jerusalem – or to translate from the Hebrew: Inheritors of the Peace, then Jesus the Prince of Peace rules over all, as every human heart is a Temple to be filled with a love for God, and for one another! 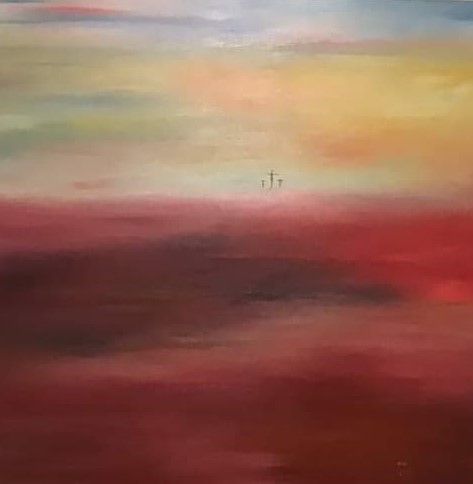