The Bitesized Bible
Song of Solomon

The Song of Solomon is unique.  It is the only book in the Bible that has love as its theme, making the narrative a love poem suitable for a wedding.  In this way, the usual way of looking at the Song of Solomon is where God is the bridegroom, and Israel the bride.  As with Ecclesiastes, the composition is chiefly about Solomon, with many accepting him as author.  However, most scholars agree that the main purpose of the book is to put sexuality in the context of pure love and not in the domain of pure lust.

It stands to reason that distortions of this meaning should appear.  For instance, even in today’s world, the narrative is used to put sexuality solely in the context of a traditional human marriage between one man and one woman – despite Solomon’s world having no concept of such.  Then, women were no more than property and the male ownership, at best, offered one contract for one woman – but any number of times; at worst, many women were lumped together on the same contract.  In this light, relationships and their sexuality were not a confluence of romance, love, loyalty, and mutual respect, they were male dominated encounters that simply devalued the women to a status no greater than objects available for sexual gratification and the production of offspring – classic Old Testament rhetoric.

Despite this damning observation, the Song of Solomon offers a template for understanding how God might prefer another way for relationships to flourish in the context of true love.  The first example is the dialogue between Solomon and the Shulamite woman.  Although it supports the man in claiming ownership, and portrays women as being insecure without the protection of a ‘husband’, there is a sense of love as the cornerstone to relationships.  The whole concept of the Song of Solomon is to deal with the highs and lows of relationship when seeking to become the beneficiary of mutual love.  However, to sing the virtues of mutual love, the song has other melodies that remind us of human failings when it comes to relationships and how we behave within them.  The greater purposes of the song are to harmonize the fact that God and humanity are destined to be together forever according to God’s will and because of God’s unconditional Love and Grace.

Whilst references to Maids of Jerusalem and Shepherd Lovers can be viewed at human level, they act as reminders of how God intends pure and mutual Love to appear.  In addition. thoughts of sexuality in the realms of true love are interpreted in a variety of ways, remaining, as they do, at the centre of theological divide.  Bearing in mind that the Song of Solomon was written without any concept of marriage today and without any premonition of the issues surrounding today’s same sex unions.

Despite our contemporary theological wrestling, the thematic truth in the Song of Solomon rises well above the human psyche and sexuality, by revealing a clearer truth from the symbolism of its characters.  For instance, Solomon and Shulamite, both translate as “Peaceful”.  This can be reflected in the Church as the bride of Christ the groom.  To give things the same analogy the church should reflect Jesus as Peace perfect Peace with our marriage to Christ as a divine mechanism for everlasting Peace – on Earth as it is in Heaven!

The image today is not one of mine, nor is it Christian.  It is of Janus, a Roman pagan god.  Janus means Archway or Gateway and Solomon’s Song is not only an archway, it's also the gateway that invites human relationship to move from being something under law to something under true love, from something under domination and oppression to something under mutual Love, freedom, affection, and everlasting Peace. 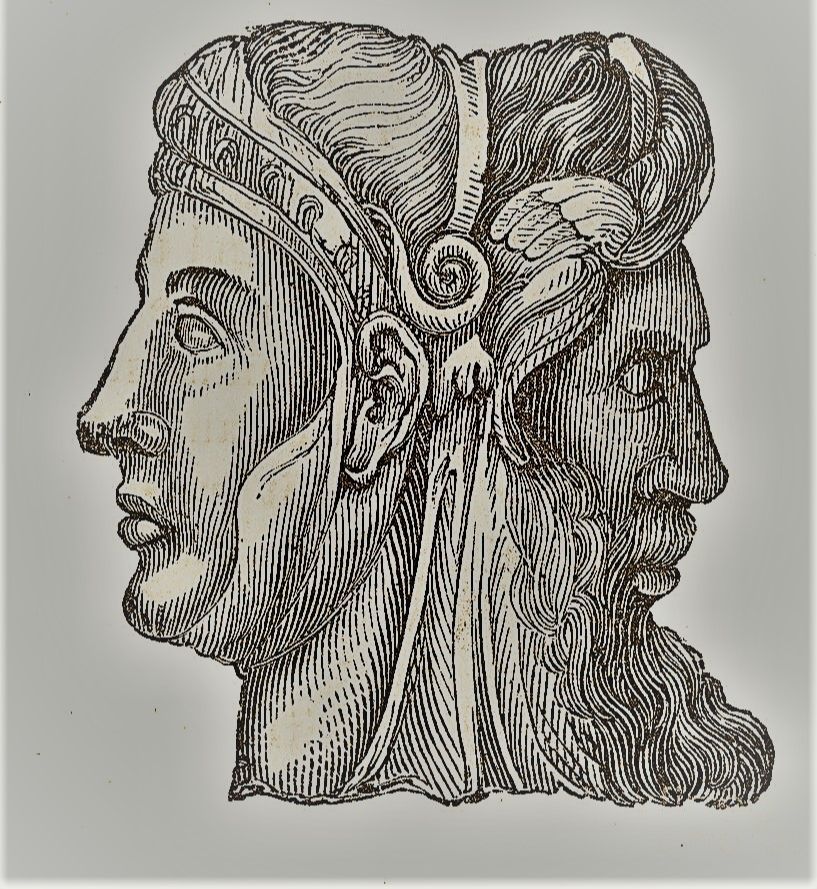